Three different types of flyers (300 copies each and all numbered) are distributed around the city. Each type of flyer is for an event of different name and genre (though happening at the same time and place). Most of them are placed secretly inside magazines and freezines (matching each flyer's genre) in bookstores and record stores.

There is a call for a free ticket on the flyer. To obtain this ticket, the audience must visit a particular location where they receive a sealed envelope. Inside the envelope is a card, on which a title of a book is written along with the name of a used bookstore (different for each envelope/card). The audience is to visit the bookstore, locate the book, and sneak out the free ticket placed inside. On each free ticket is a further instruction for a certain task that the audience should enact during the performance. In order to enter free, the audience must (a) present the free ticket at the entrance, and (b) enact the specified task during the performance, (c) without mentioning any of this to other audience members. 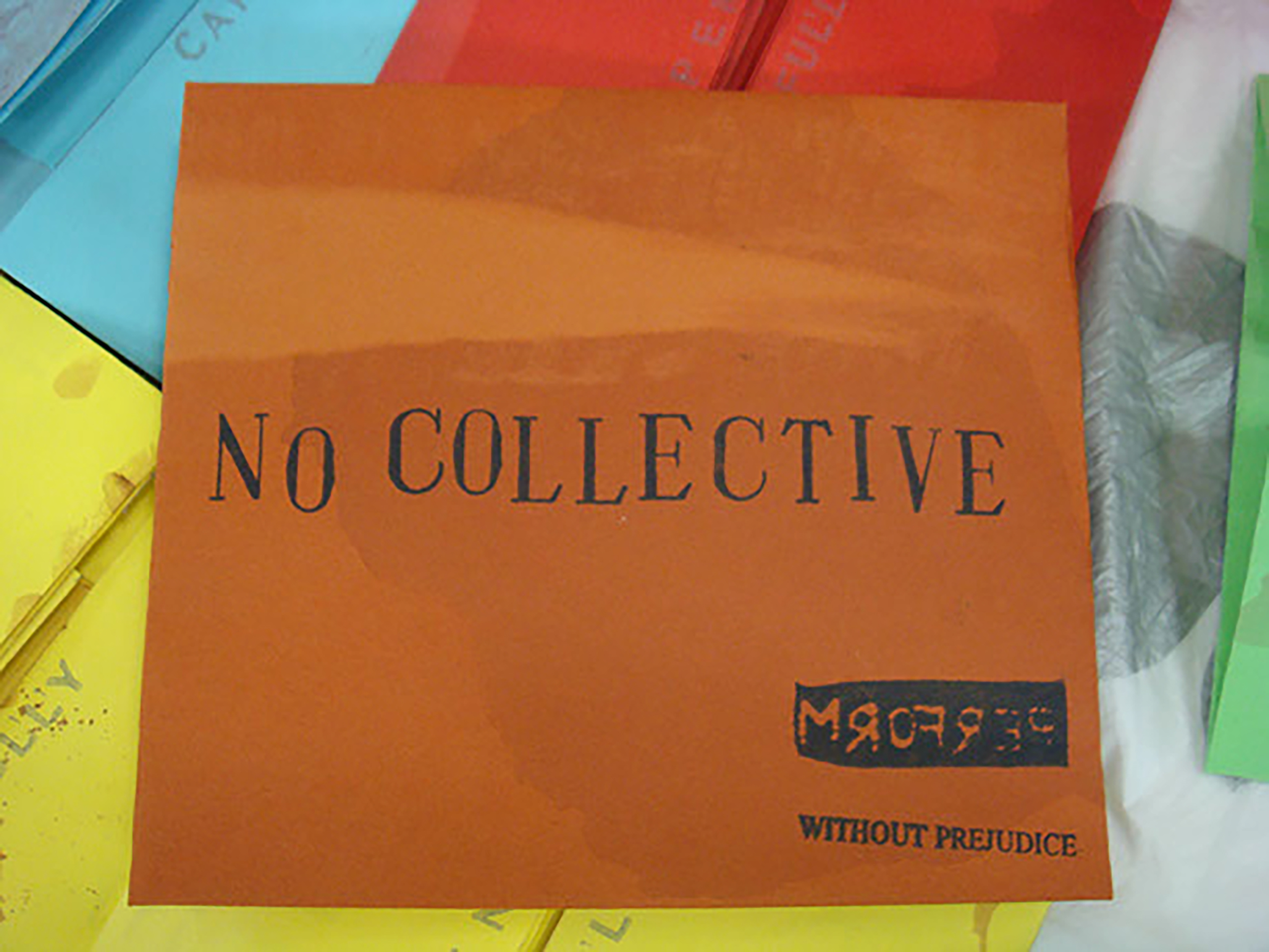 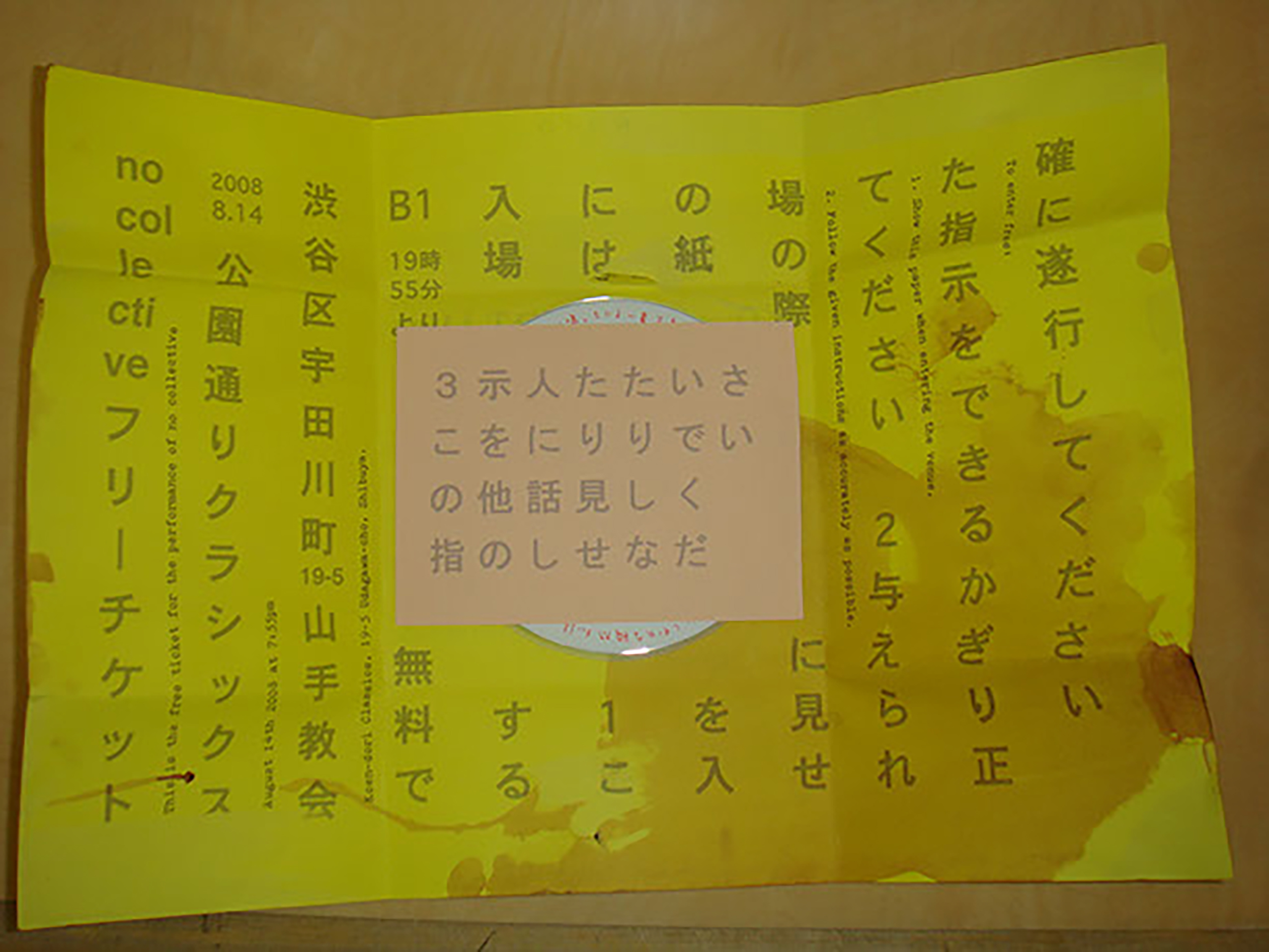 Upon arriving to the venue, each audience is asked which event they came to see. They are then instructed to line up in one of the three different locations outside the venue accordingly. The four performers plus the secret guest performers who obtained a free ticket also line up in one of the three locations (with at least one performer in each line). Each group enters the venue at different times (at 2 minute intervals).

Lighting is set at medium level.

Each performer sits in one of the four instrument stations dispersed within the venue (piano, guitar, bass, and miscellaneous sound devices at the premiere). 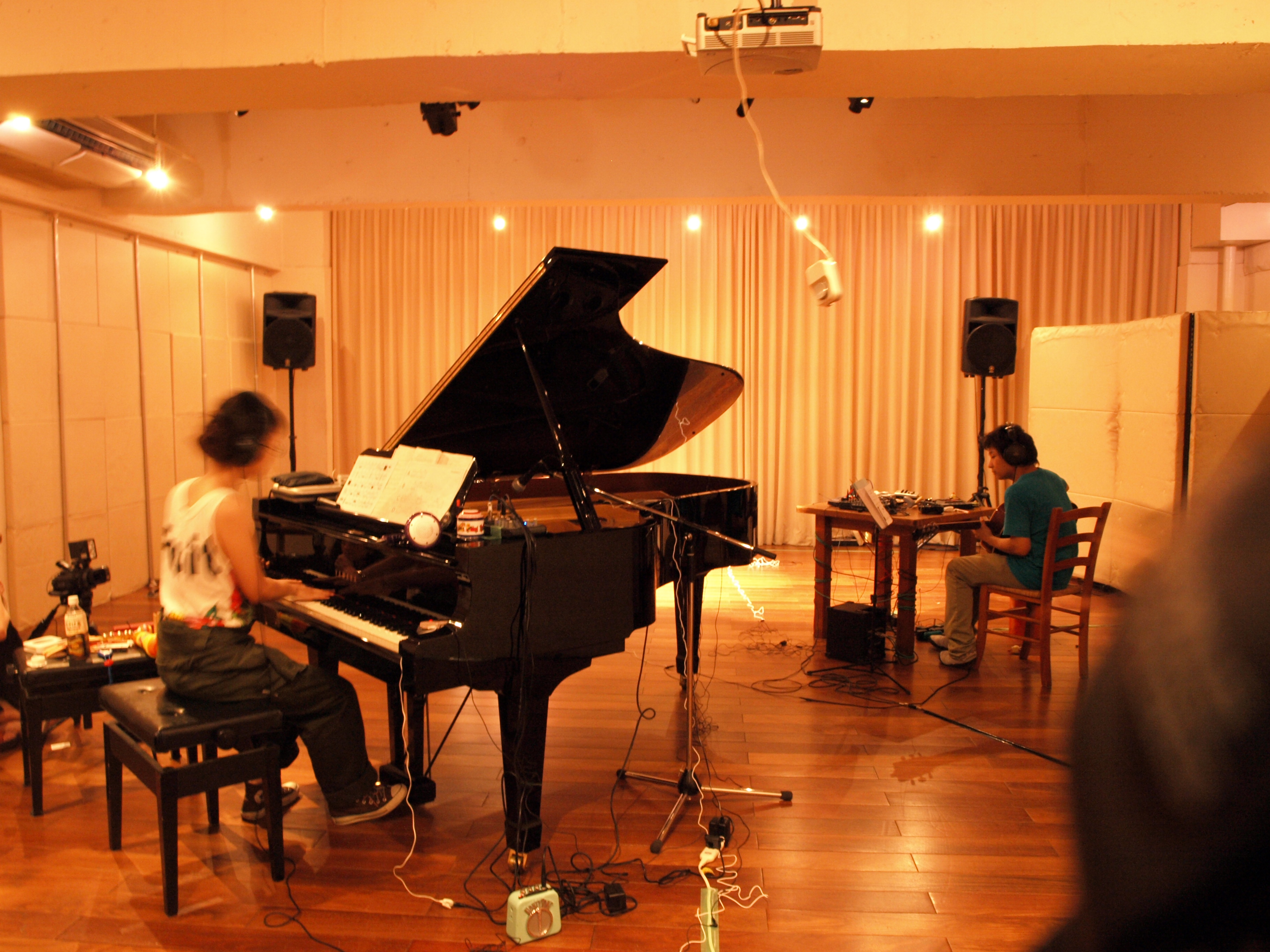 Performers put headphones on. The "pre-text," a remix track composed from pre-existing music, is played from the headphones. The performance of music (production of sound head by the audience) happens in reaction to this audio pre-text. A different graphic score is given to each performer, which instructs: (a) time brackets, (b) parametric constraints regulating each performer's reaction to the pre-text within each time bracket.

Performers should never look at any audience member or any other performer. 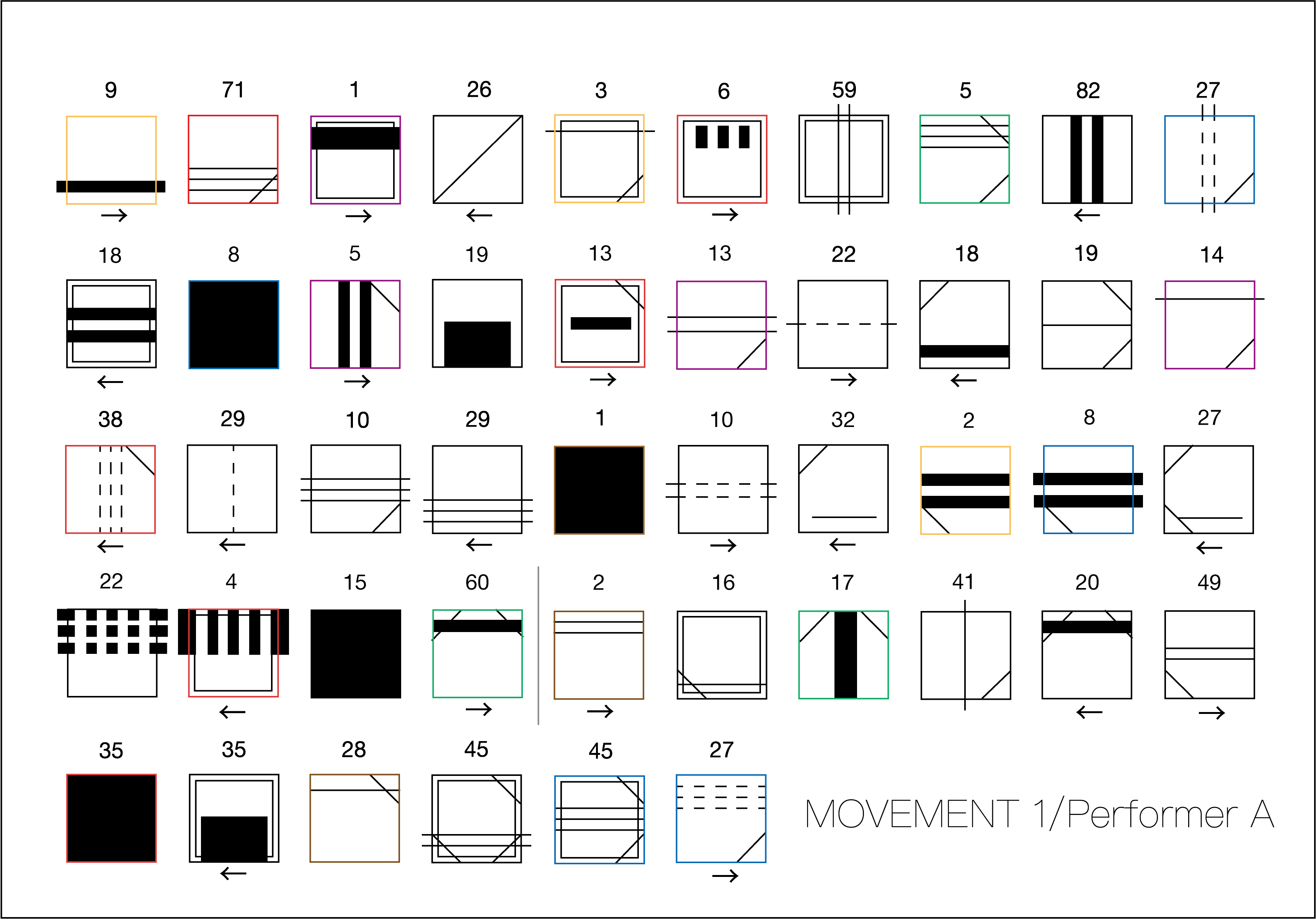 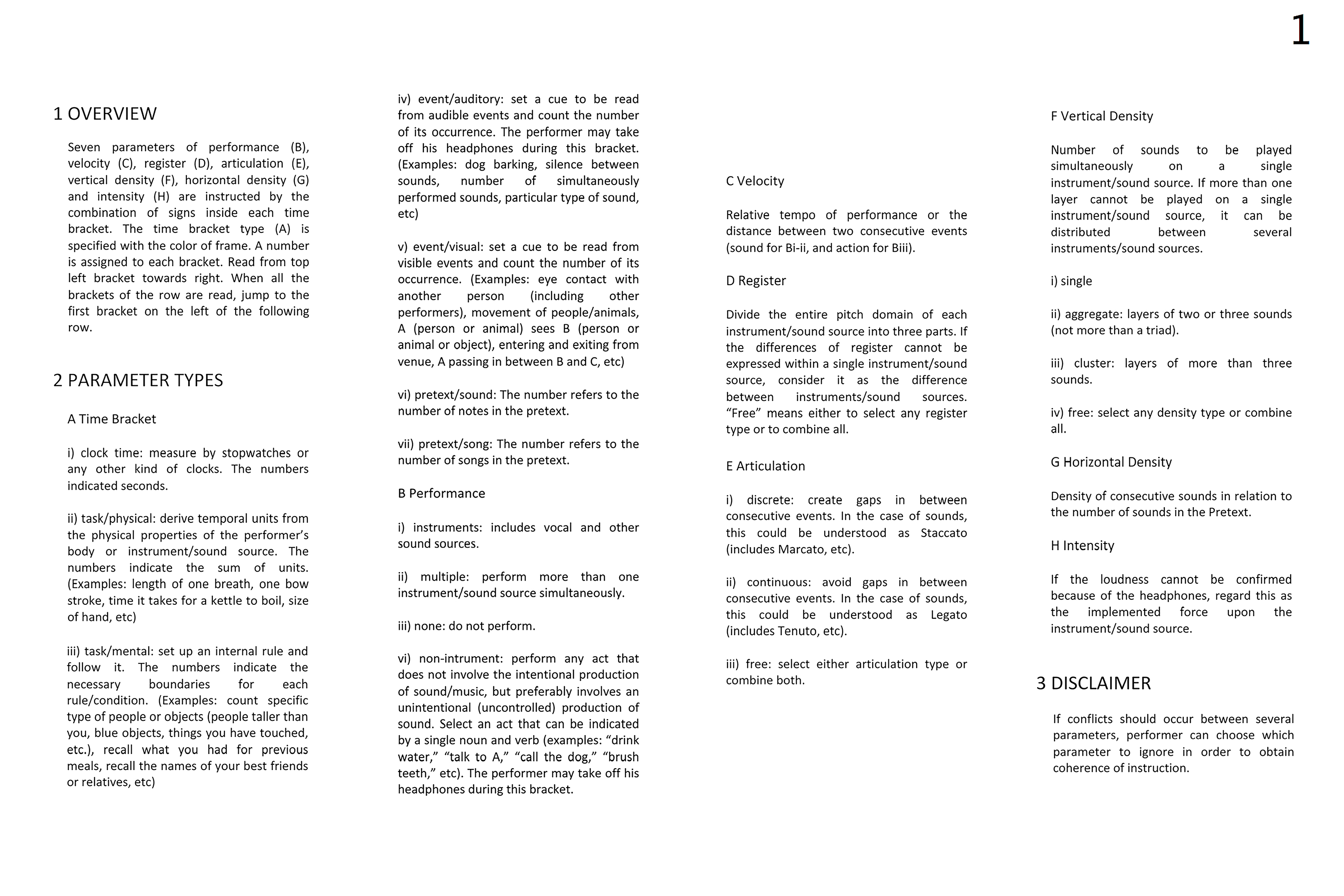 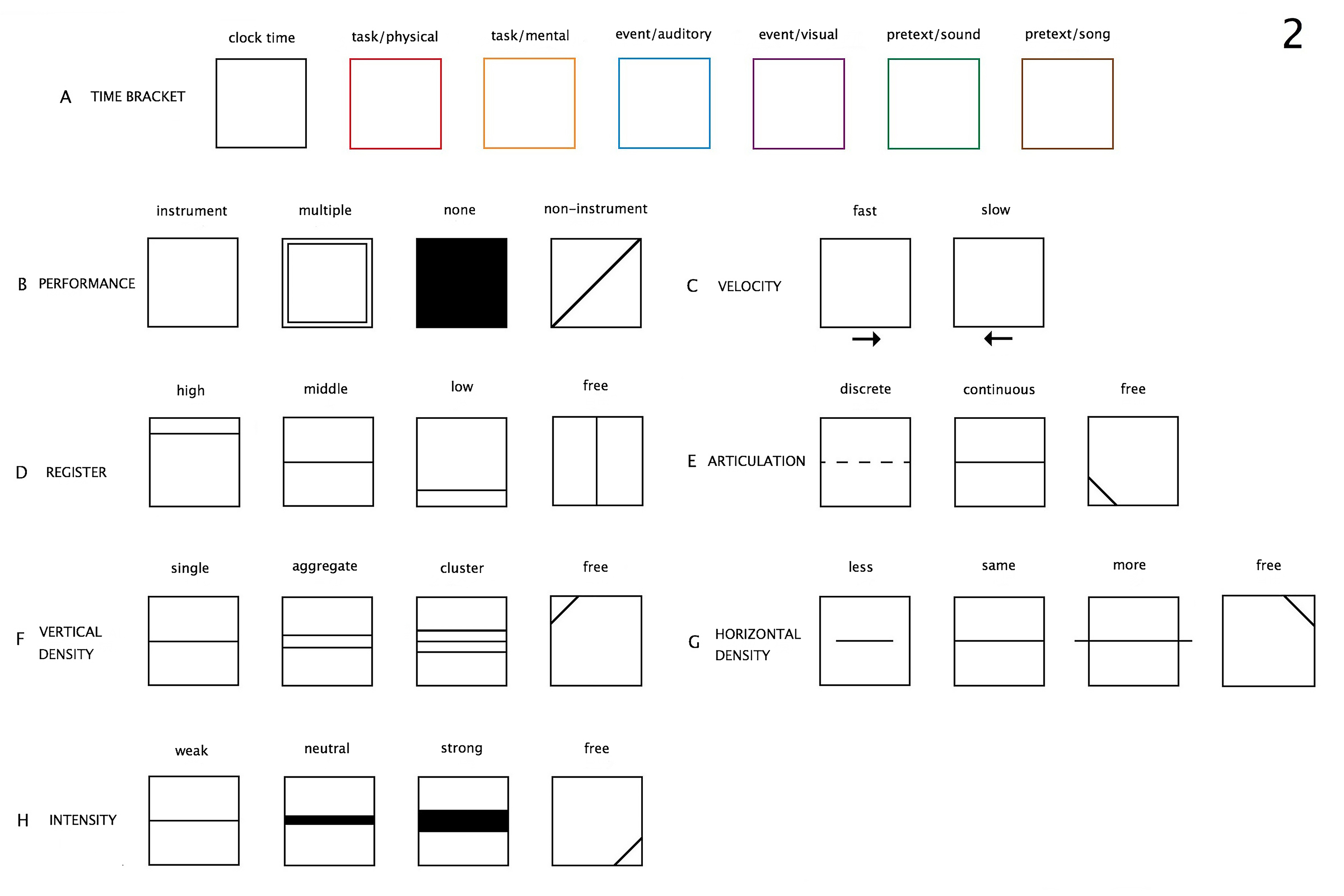 A small mobile speaker with wheels is attached to a dog, and a contact microphone to a pigeon. The dog is free to run around the venue but the pigeon is kept inside a bird cage. Their proximity creates feedback.

Audience members arriving late have been instructed through the flyer to call the venue and inform how late they will be. These phone conversations are amplified and played out loud during the performance.

All sounds are recorded.

At the beginning of the movement, one performer shouts at the venue staff to turn all the lights to maximum level. 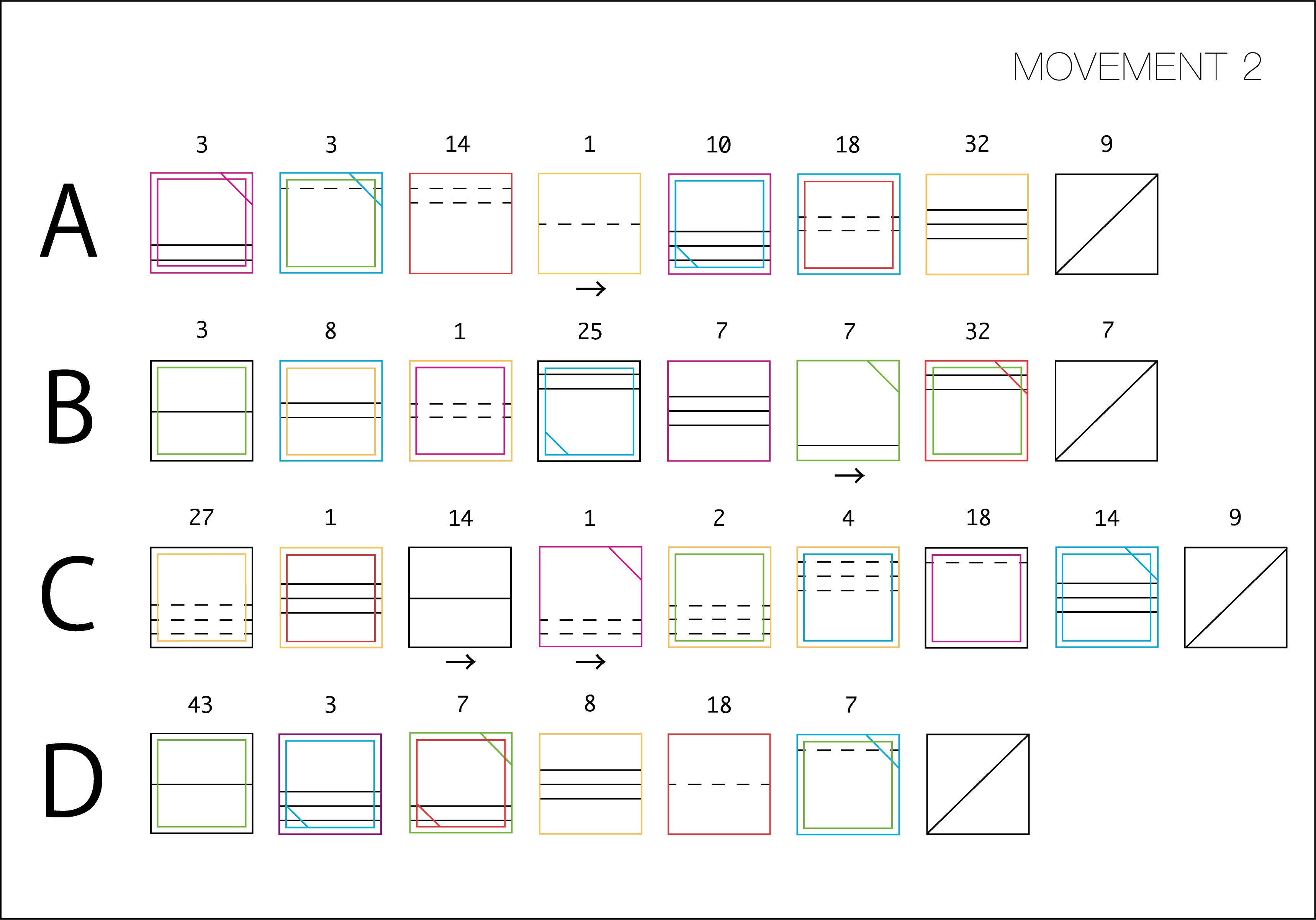 All time brackets are determined by visual cues from events that happen in real-time inside the venue (audience, animals, other performers, guest performance, etc). Performers are thus required to constantly look around for cues. If a given cue refers to the audience, each performer should only take into account those people pertaining to the group they lined up with before entering the venue. Performers also switch stations following the cues instructed in the score. In some brackets, actions other than usual performance of music are instructed (e.g., going to the bar and getting a drink, smoking, talking with an audience, etc). These actions are also to be executed following both the audio pre-text and the graphic score.

The pigeon is set free. The task of one performer then becomes to re-capture the bird within the temporal confines of the movement (while also following the visual score and the audio pre-text and performing music). Feedback is produced between the contact microphone attached to the pigeon and the mobile speaker attached to the dog. 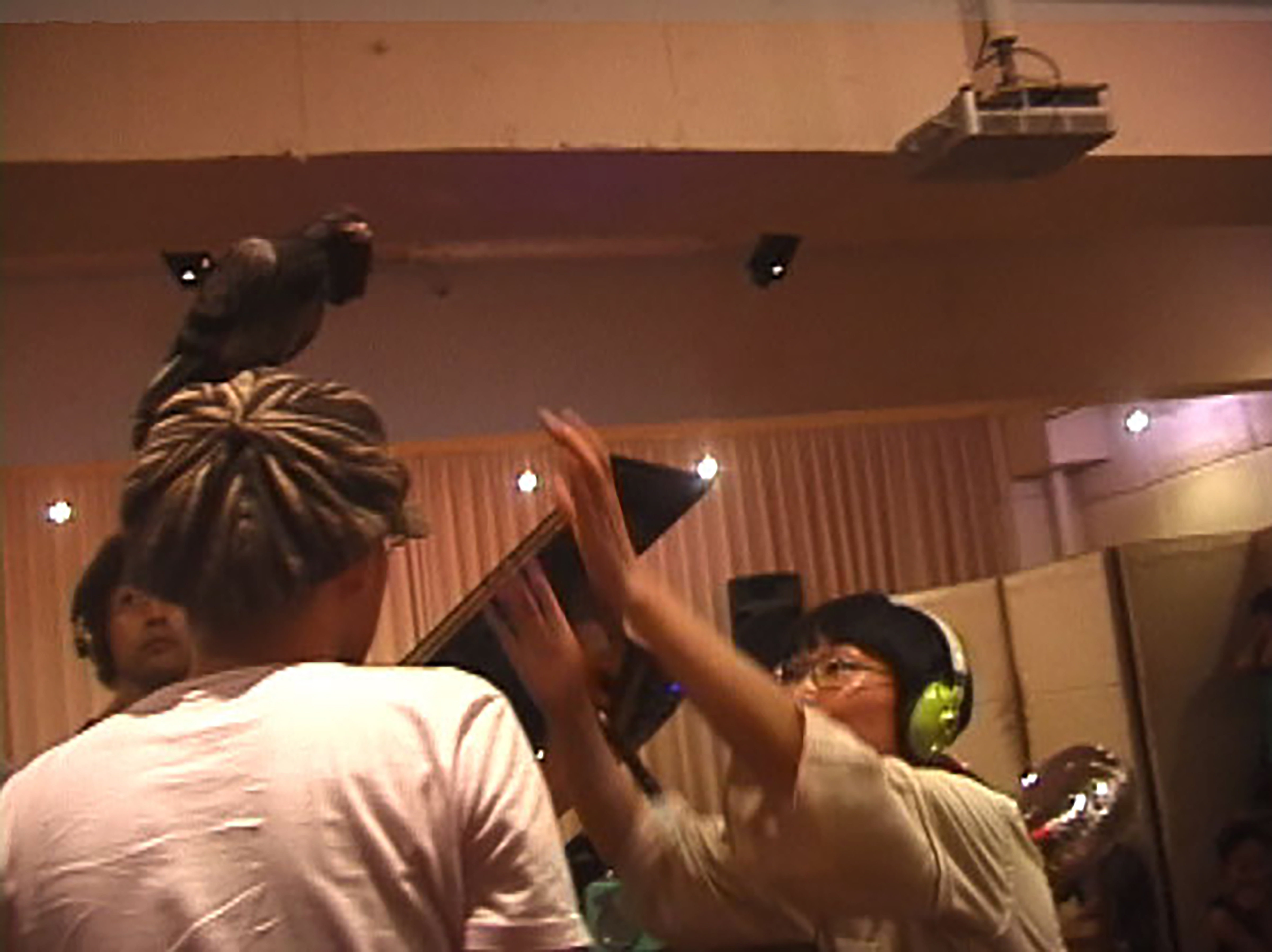 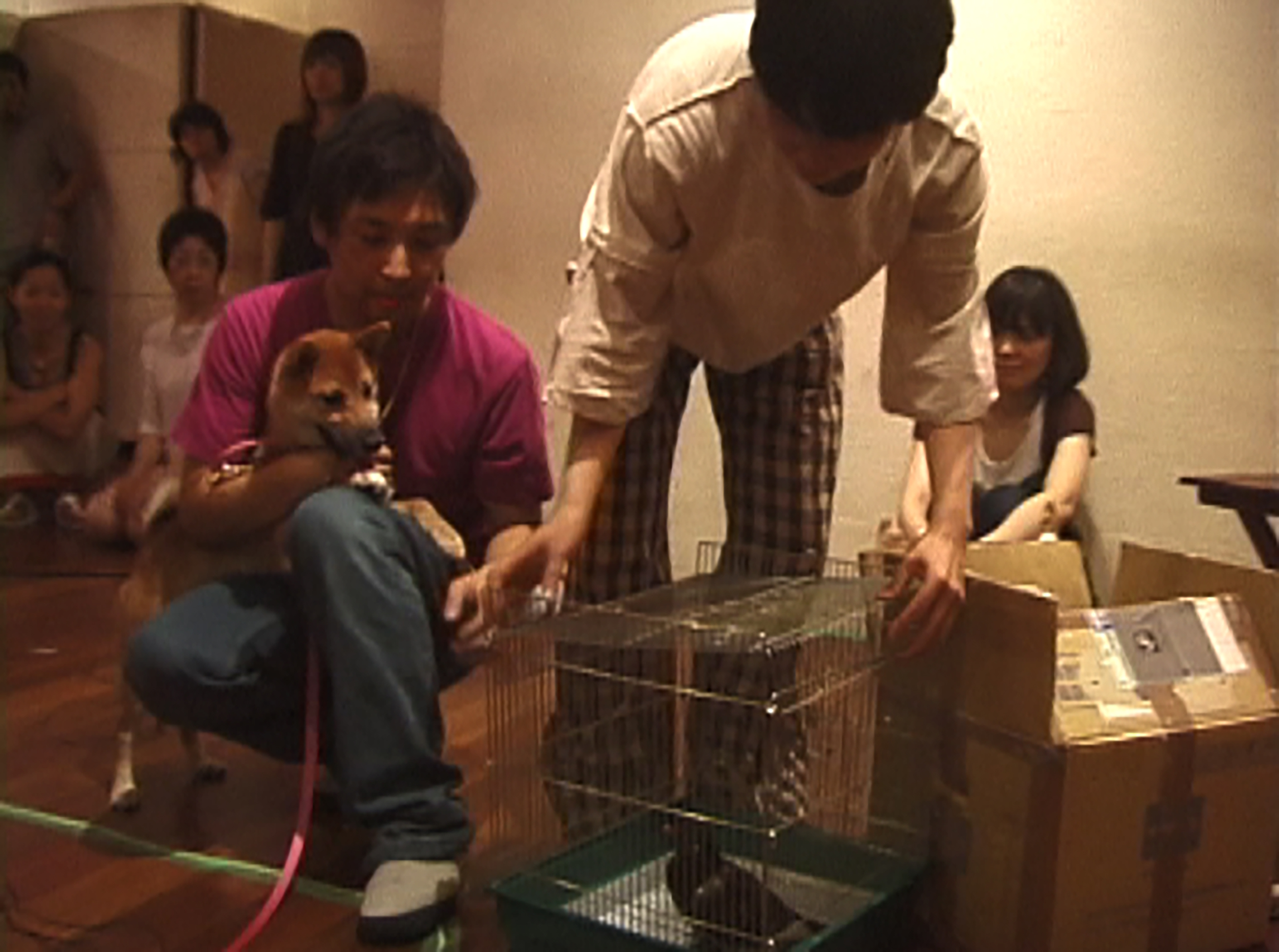 All sounds are recorded.

Performers take their headphones off.

One performer leaves the venue with the re-captured pigeon in the birdcage. As they exit, they turn all the lights off. They then take the pigeon to a nearby park and release her. When this is accomplished, they call the venue with her cell phone. The sound from this cell phone (catching outside street noise) is amplified inside the venue. They stay outside and strolls around the streets, returning to the venue only at the end of the movement.

Of the three performers left in the venue, one performer controls the mixer, combining the recorded sound of movement 1 and 2, along with the real time sound of streets coming in via their cell phone. The mixed sound is played throughout the various speakers in the venue. The same performer also switches the combination of the output speakers according to predetermined sequence and time bracket.

The remaining two performers put contact microphones  on their bodies so that feedback is produced according to his/her proximity to the activated speakers. These two performers have two tasks: (a) get away from the feedback area (which constantly changes according to the switching of speaker combinations); and, (b) following a given time bracket (which is based on the performer’s act of counting), and using whatever means in wherever place one finds oneself at that given moment, make the loudest sound possible at the end of each bracket. The bracket intervals decrease gradually. After a certain point, the sound producing means become limited to clapping, so that both performers start clapping incessantly.

The outside performer returns to the venue. A large feedback is produced between their cell phone and the venue speakers as they enter the space. They turn on all the lights.

One performer goes to the piano and plays a cadenza, to which the rest of the performers bow and the audience members take over the clapping. 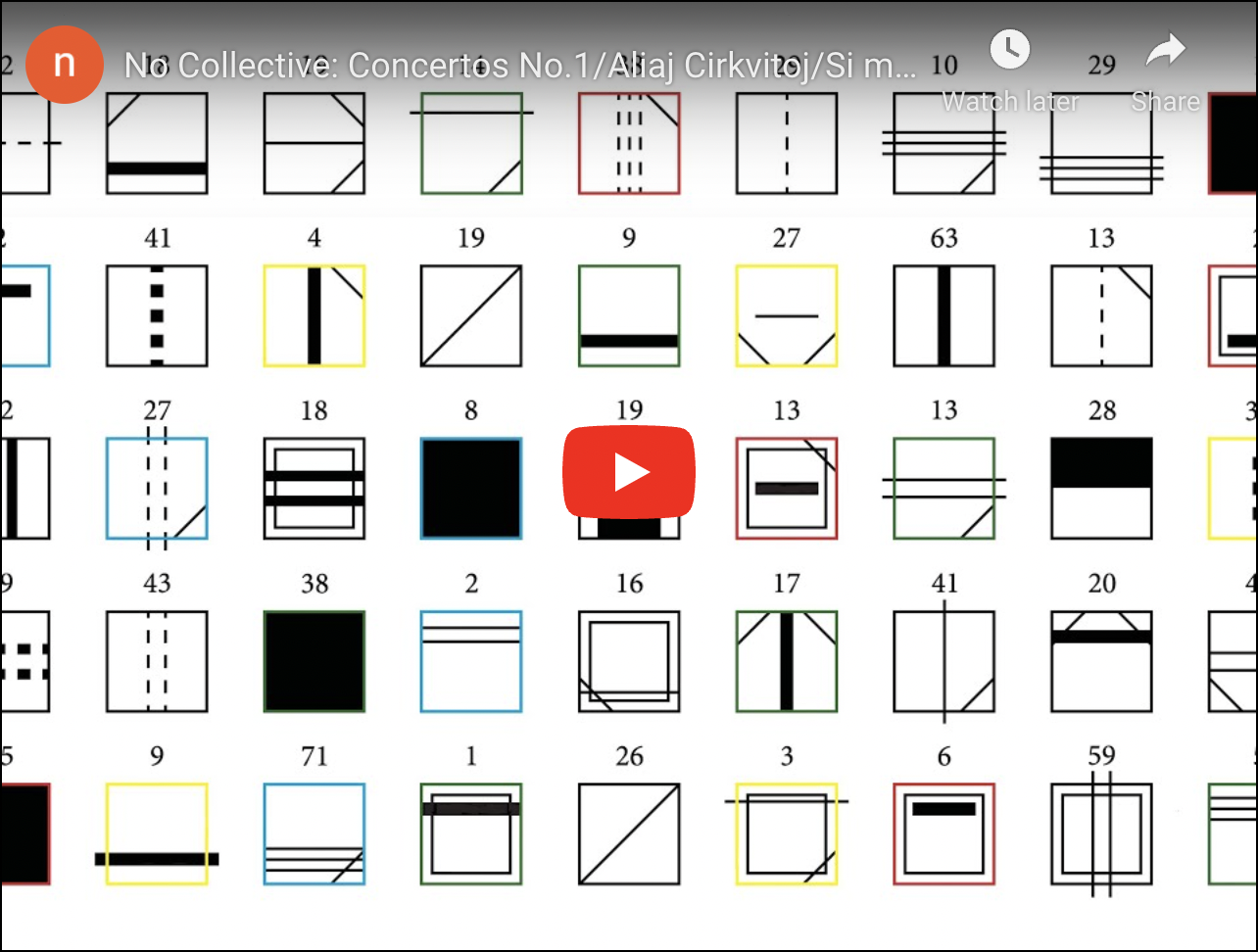