All flyers are printed on light-sensitive card which gradually darkens its color when exposed to light, thereby rendering the printed information less and less intelligible as time goes by. Each card is placed inside a closed envelope so that the process of deterioration starts only when somebody sees it. On the front of each is one of 26 different starting times (with a minimum difference of six minutes between them) and ending times, along with different entrance fees corresponding to the length of the performance. On the back is a map to the venue. The type of the flyer is indicated on the envelope using a letter of the alphabet (a to z). 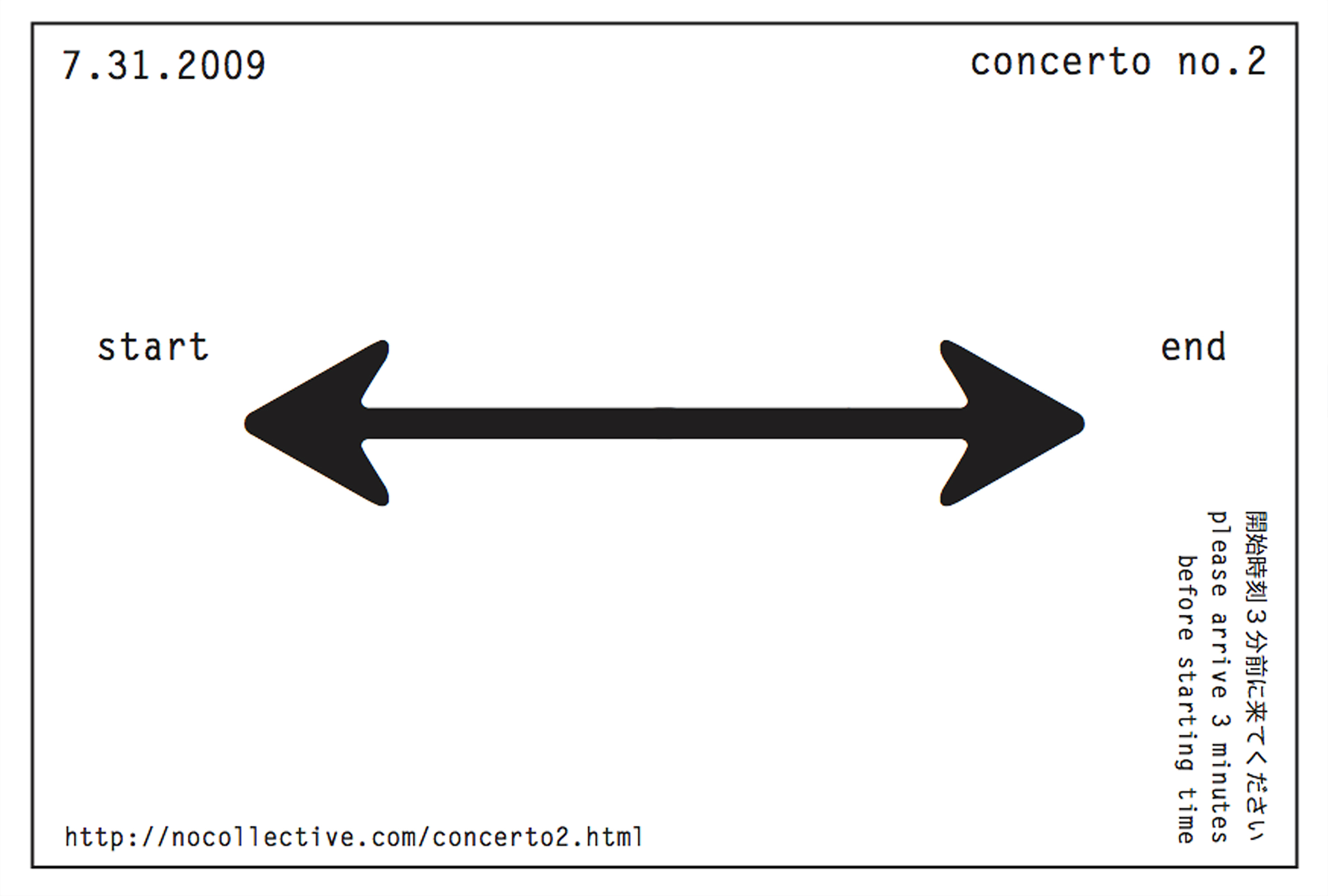 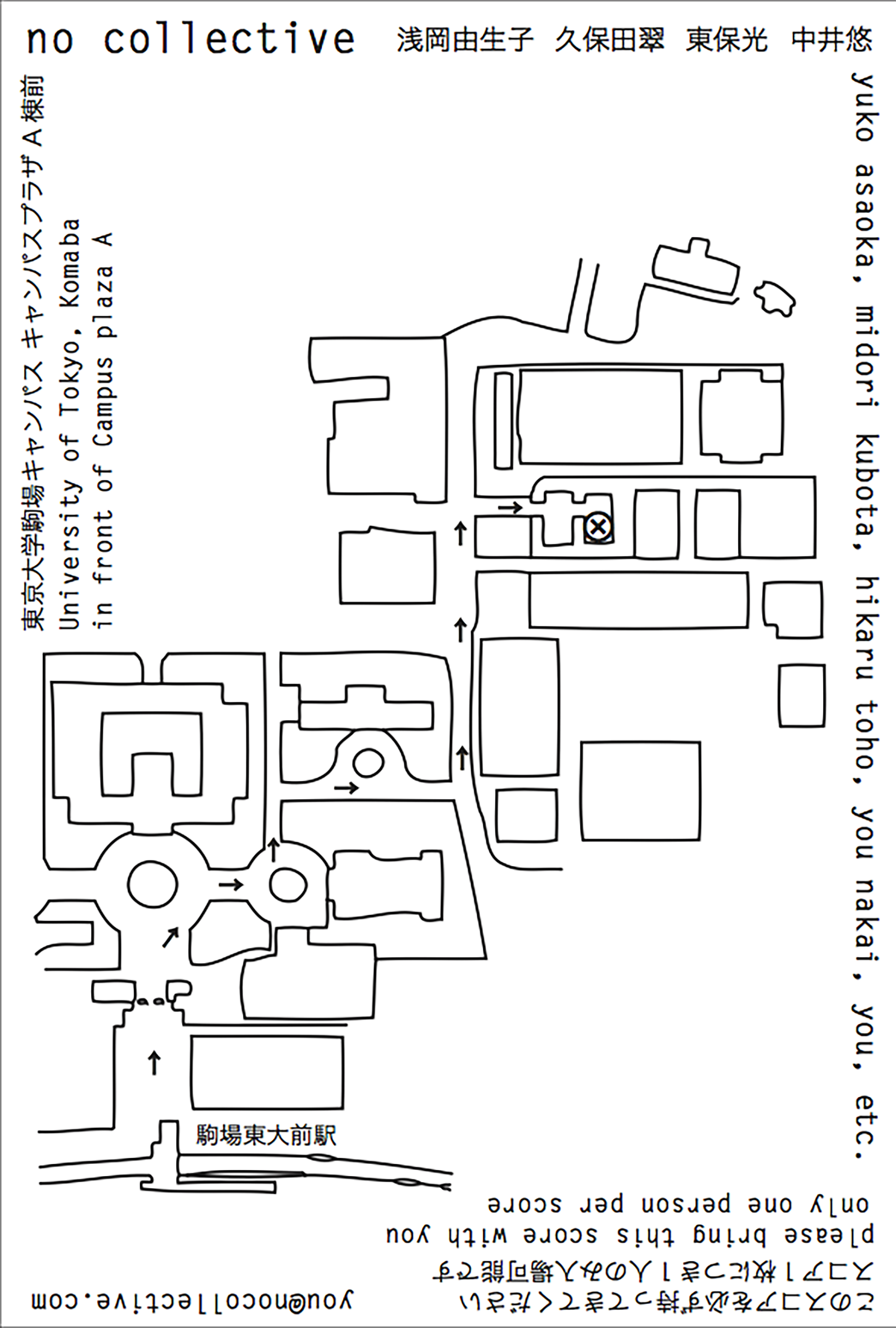 The performance takes place in two adjacent rooms inside a building where other musicians are rehearsing (unrelated to this piece). Thus, the environment is filled with fragments of different music.

All instruments used in the performance require electricity in one way or another (electric guitar, electric bass, microphones, drum pad and keyboards at the premiere). A balance should be established between pitched and non-pitched instruments. 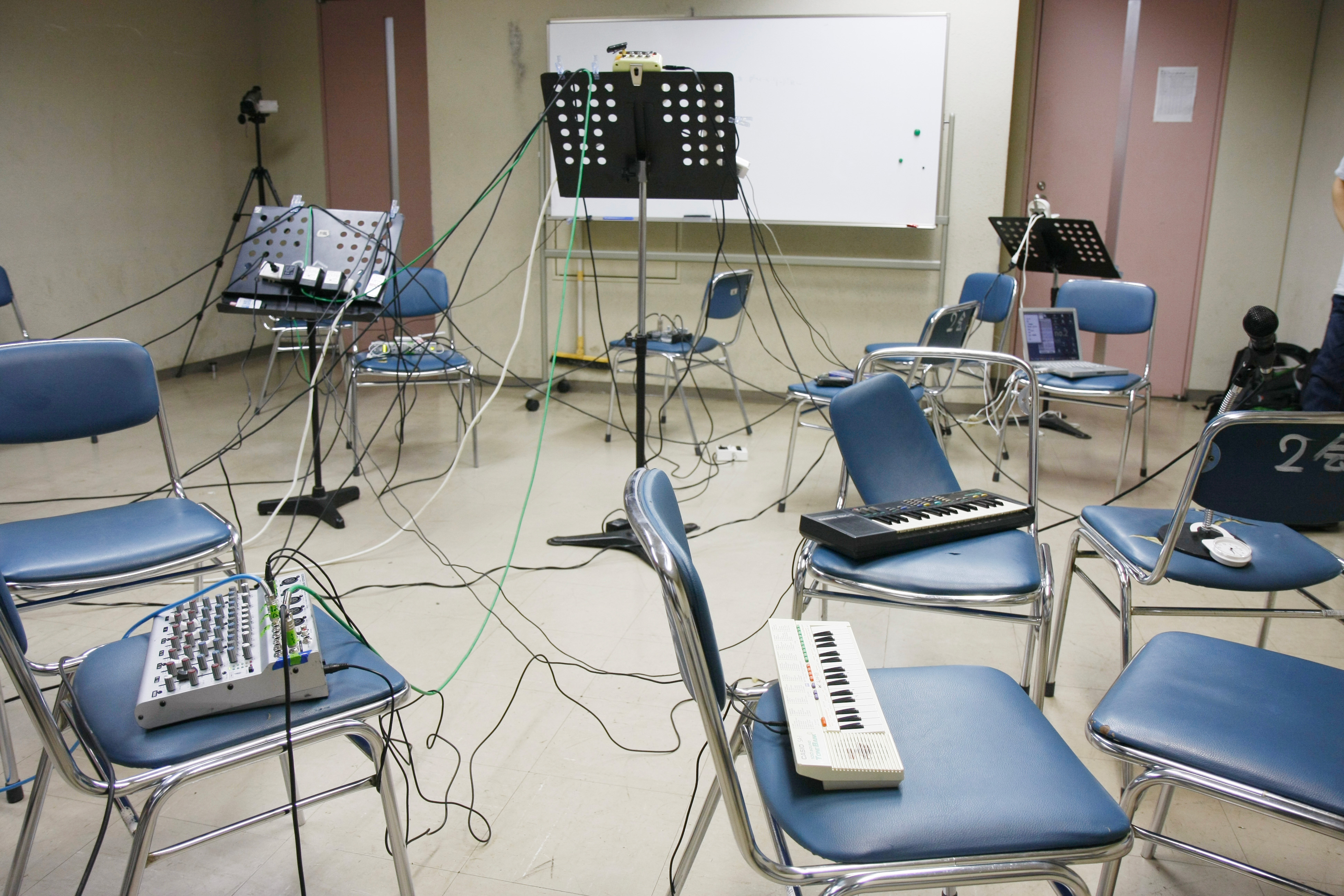 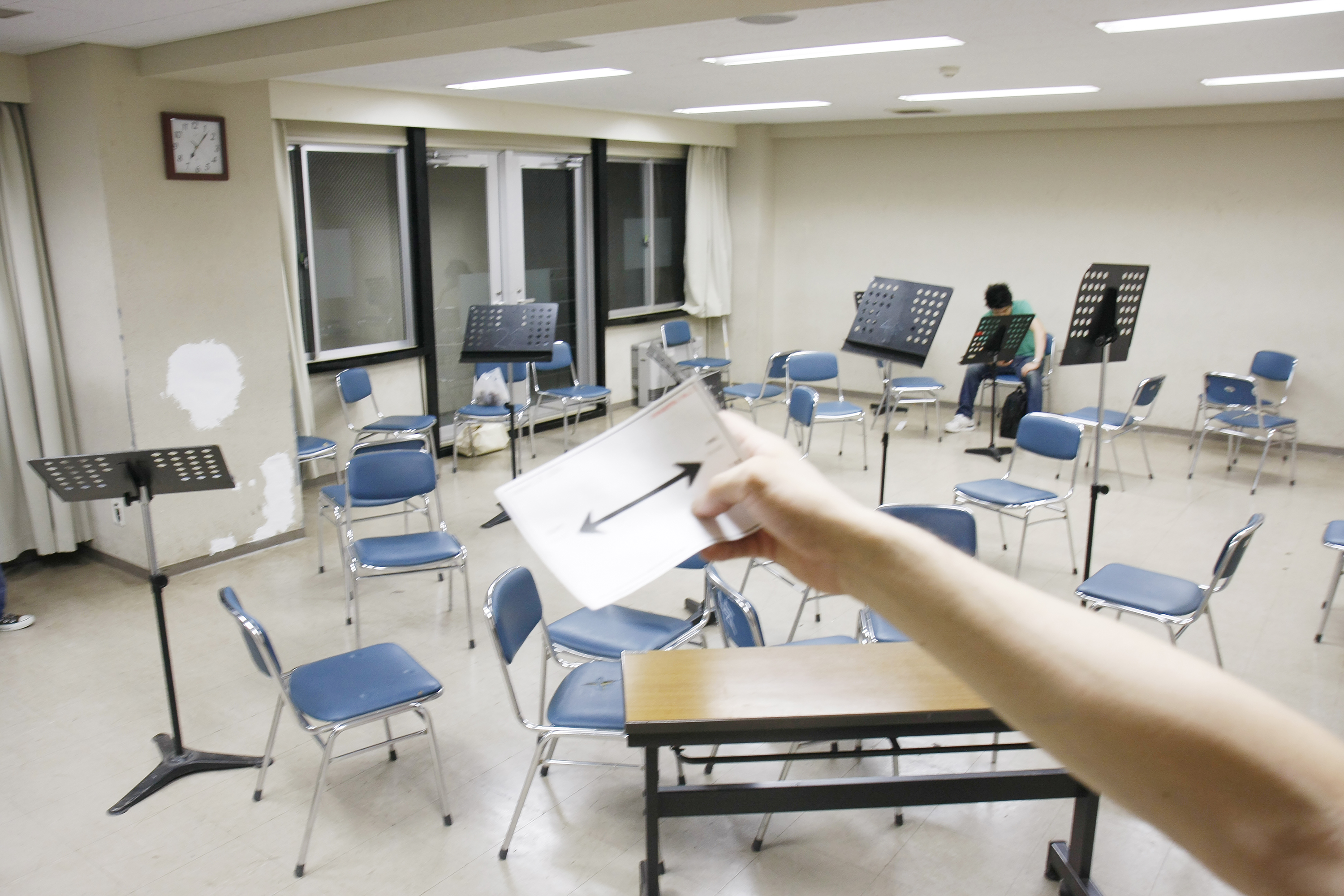 A sensor is attached to the door of each room, which triggers a six minute provision of electricity to the room every time the door is opened. Consequently, the music goes on as long as the audience keeps coming in, but halts every time the flow of audience stops for more than six minutes.

All equipment and cables connecting them should be dispersed as widely as possible in each room, creating a web of cables and making any movement difficult and risky of physical interference with the set up (and consequently with the sounds produced). 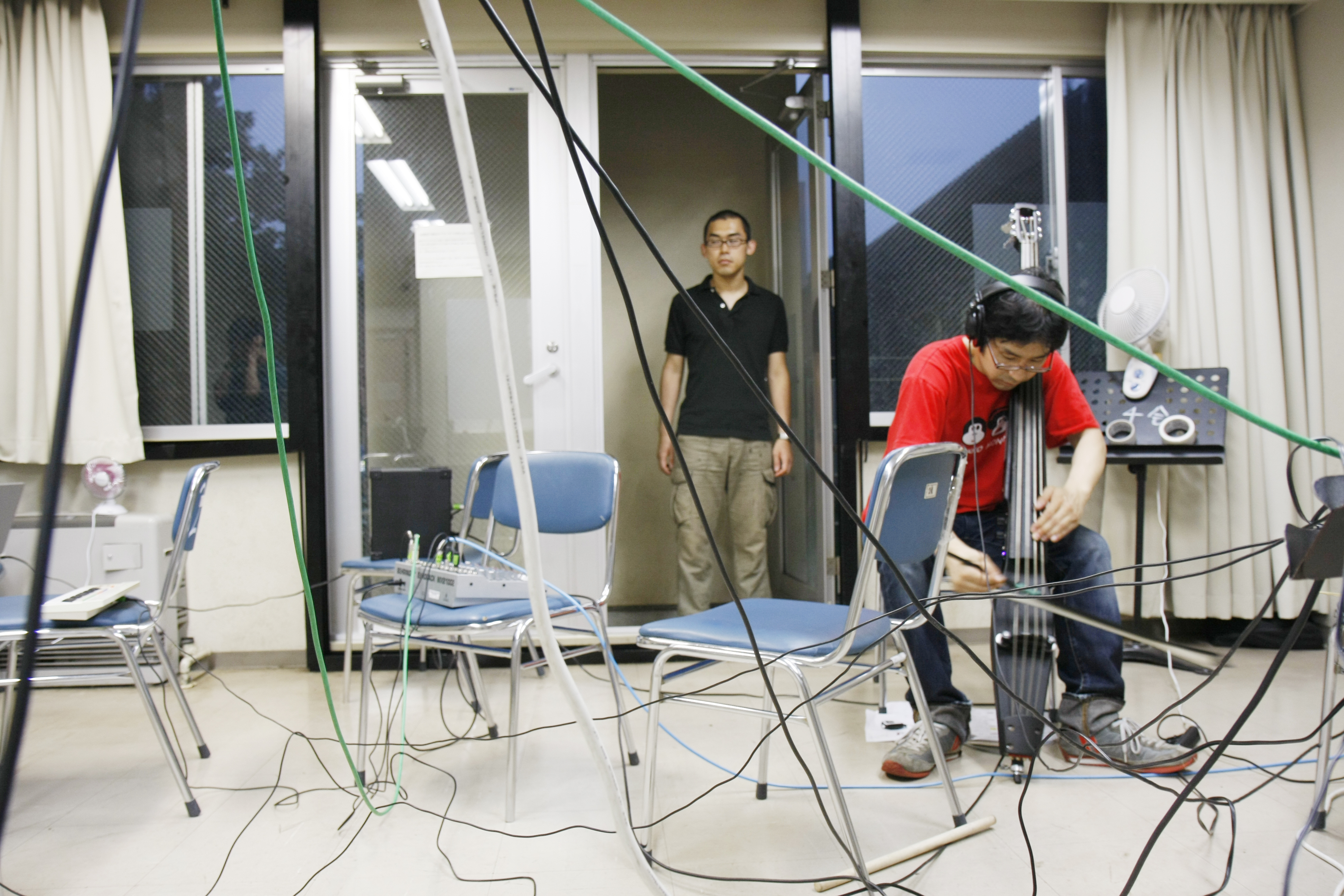 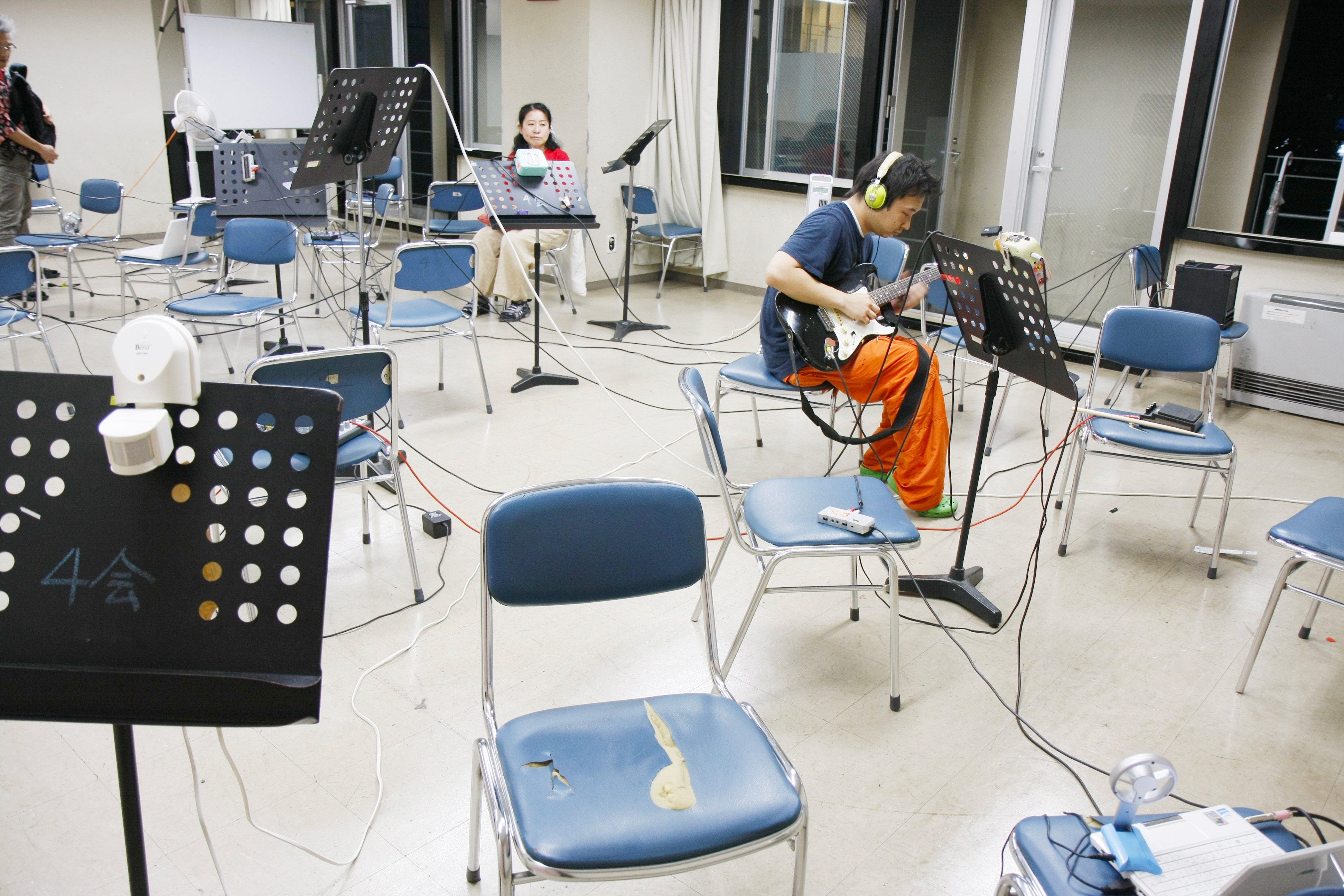 All sounds produced in one room is delayed for the variable length of 0-12 minutes and transmitted to the speakers of the other room. The length of delay is changed frequently following any particular rule.

There are two performers in each room. All performers wear headphones. 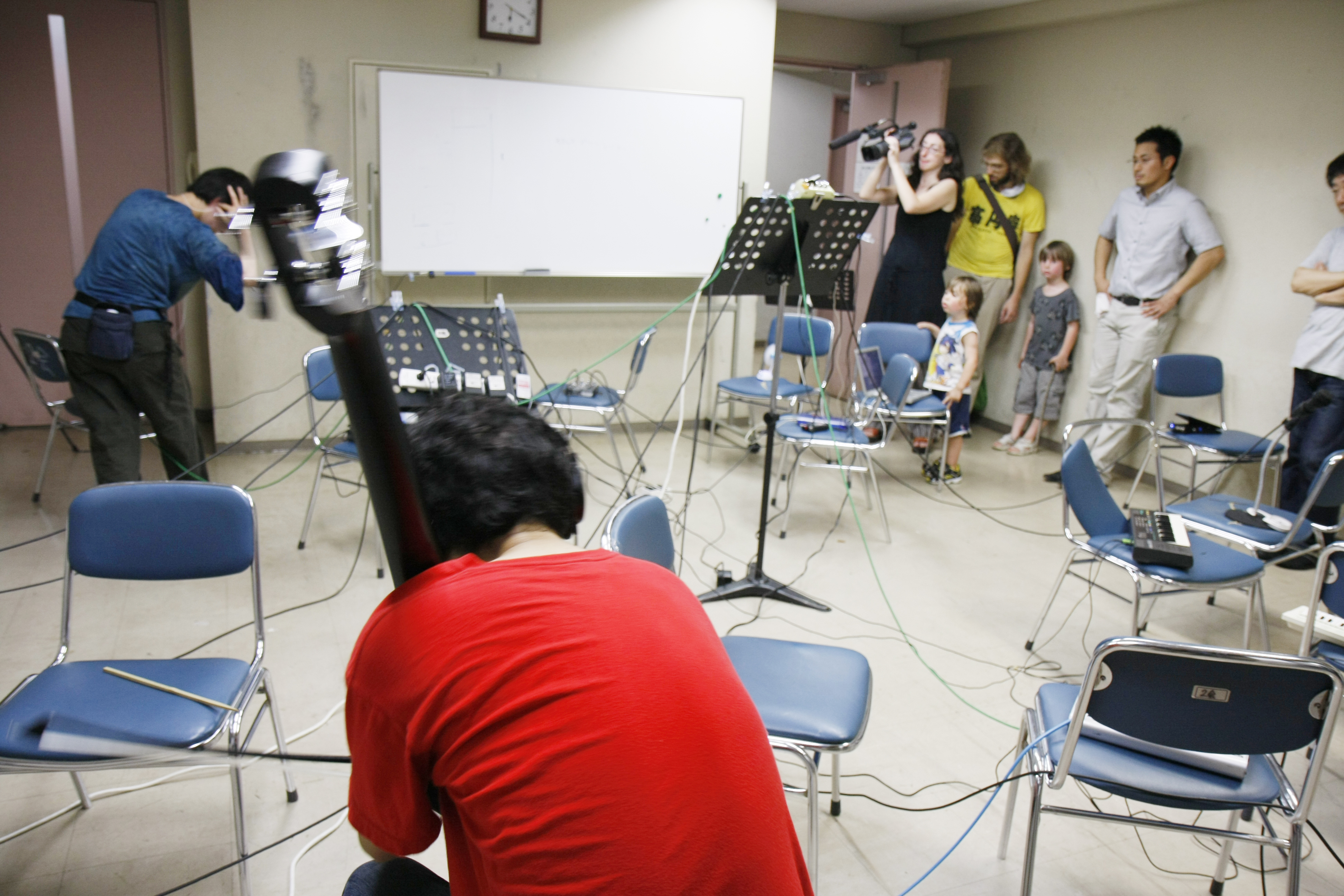 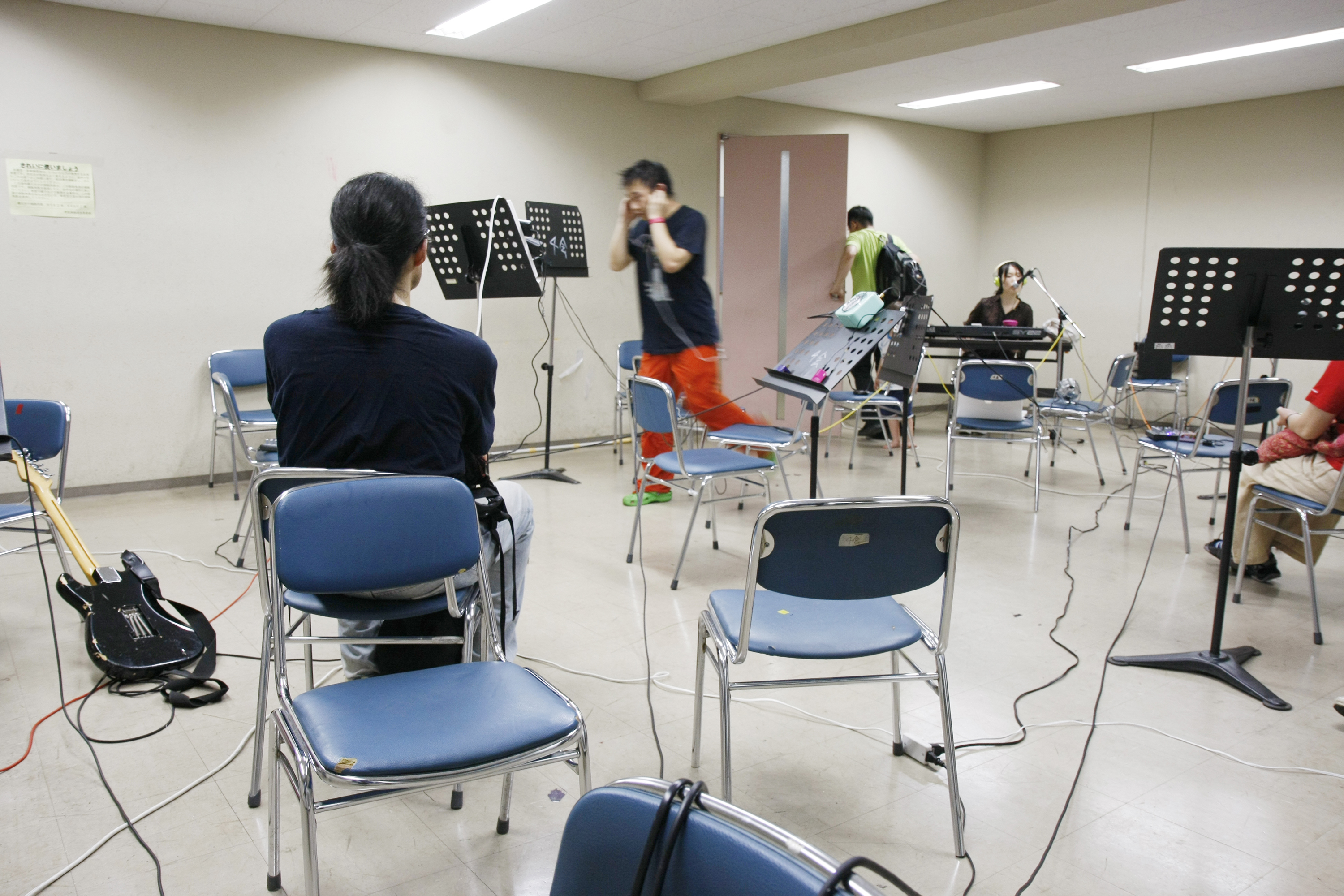 Every six minutes, one performer in either room goes to pick up an audience member or a group (who are instructed through the flyer to wait in front of the building). They then guide the audience into the building, wearing binaural microphones which pick up all the sounds they (along with the audience) hear while moving around, in addition to the predetermined “guide speech” they must give to the audience. All the sounds picked up are transmitted to the headphones of other performers in their respective rooms. Before going back to the room, the guide performer spends at least six minutes guiding the audience through different parts of the building, searching for, and picking up sounds.

The performers in the room imitate the sound they hear through their headphones. The degree of imitation will vary according to capacity of the instrument (pitched/non-pitched) and individual technique of each performer. A performer may also use their voice to whistle, hum or sing the pitch name (do-re-mi) of the heard sound. 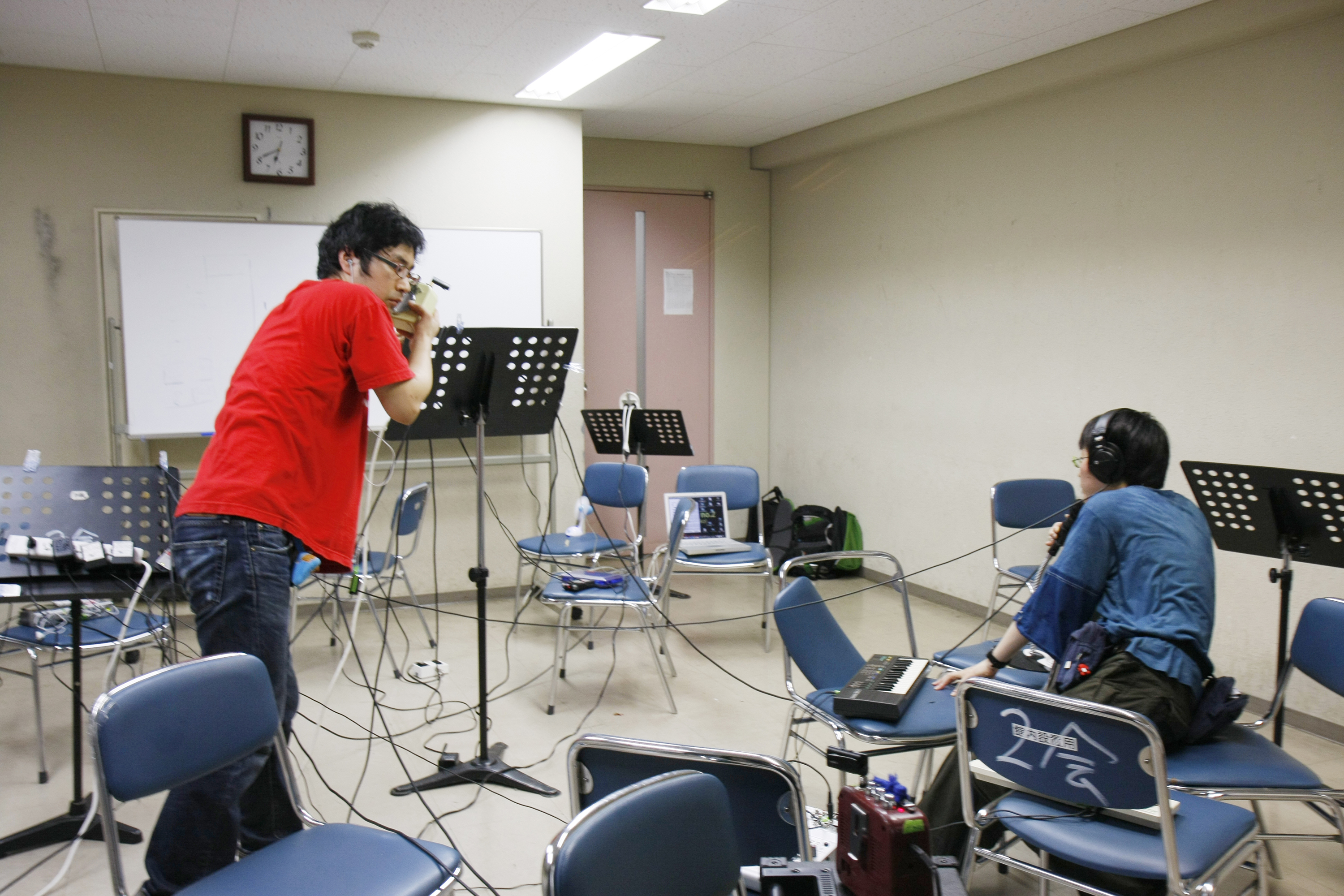 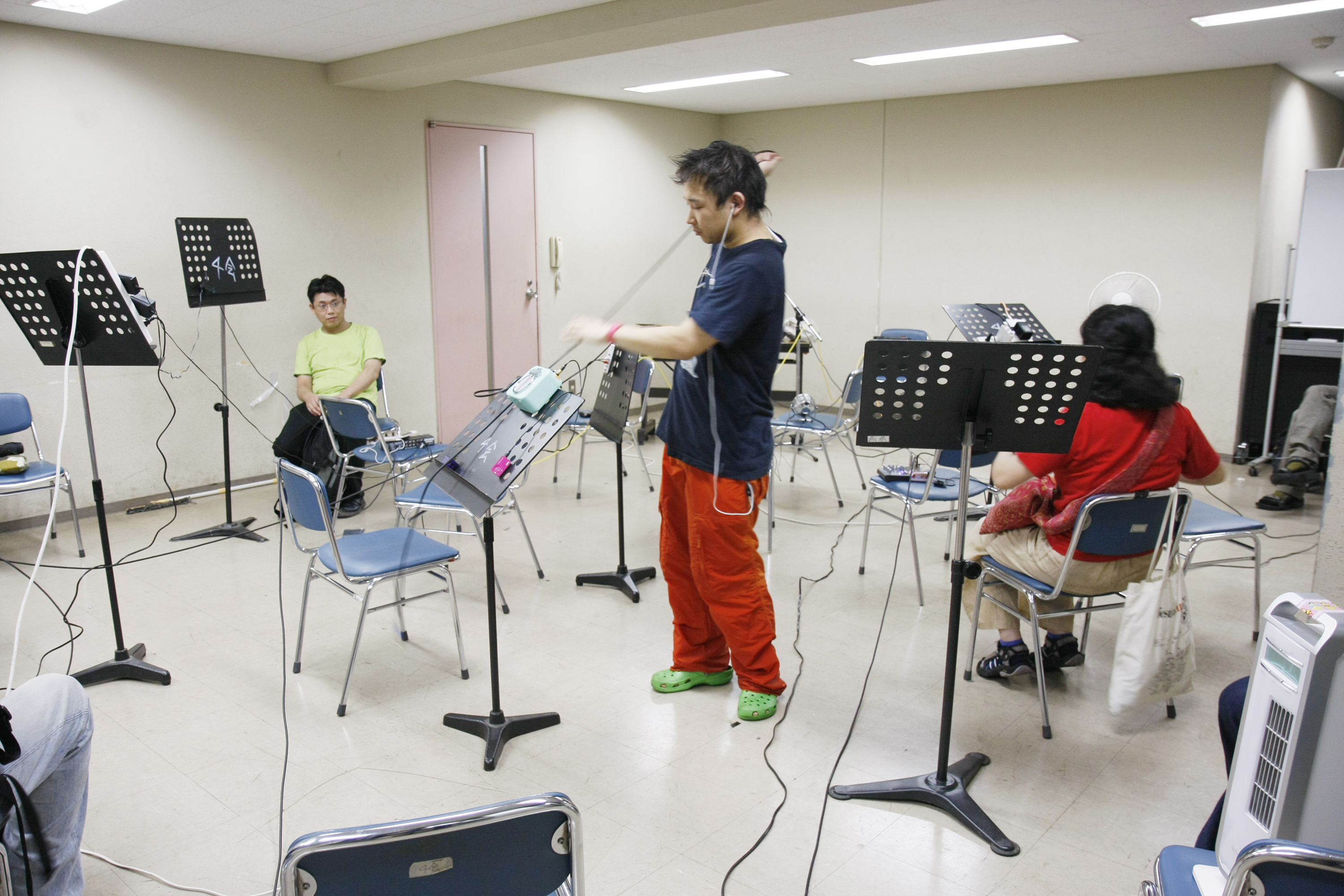 Upon returning to the room, the guide performer covers their ears in order to prevent feedback between the binaural microphone and the speakers in the room. They then spend the next six minutes “mixing” the sound in the room by moving around the space and controlling the dispersed equipments. The proximity between their ears and speaker creates feedback, which can be controlled through: a) the pressure of their hands covering the ears, or, b) direct manipulation of speaker’s volume. “mixing” includes the opening and closing of windows.

During the last thirty minutes of the performance, performers gradually pack their equipment (in turns), following a predetermined step which ensures that music never halts during this process. 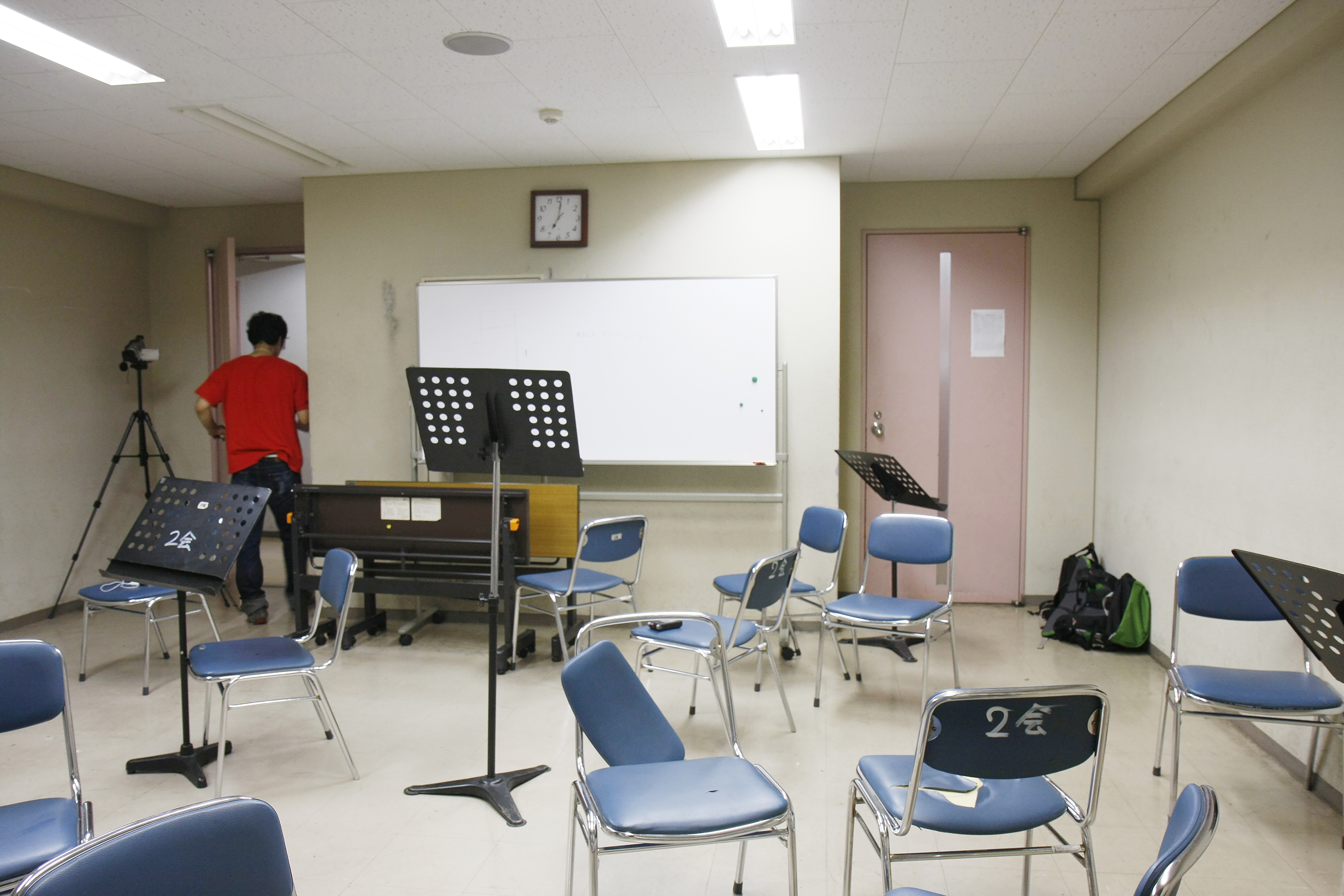 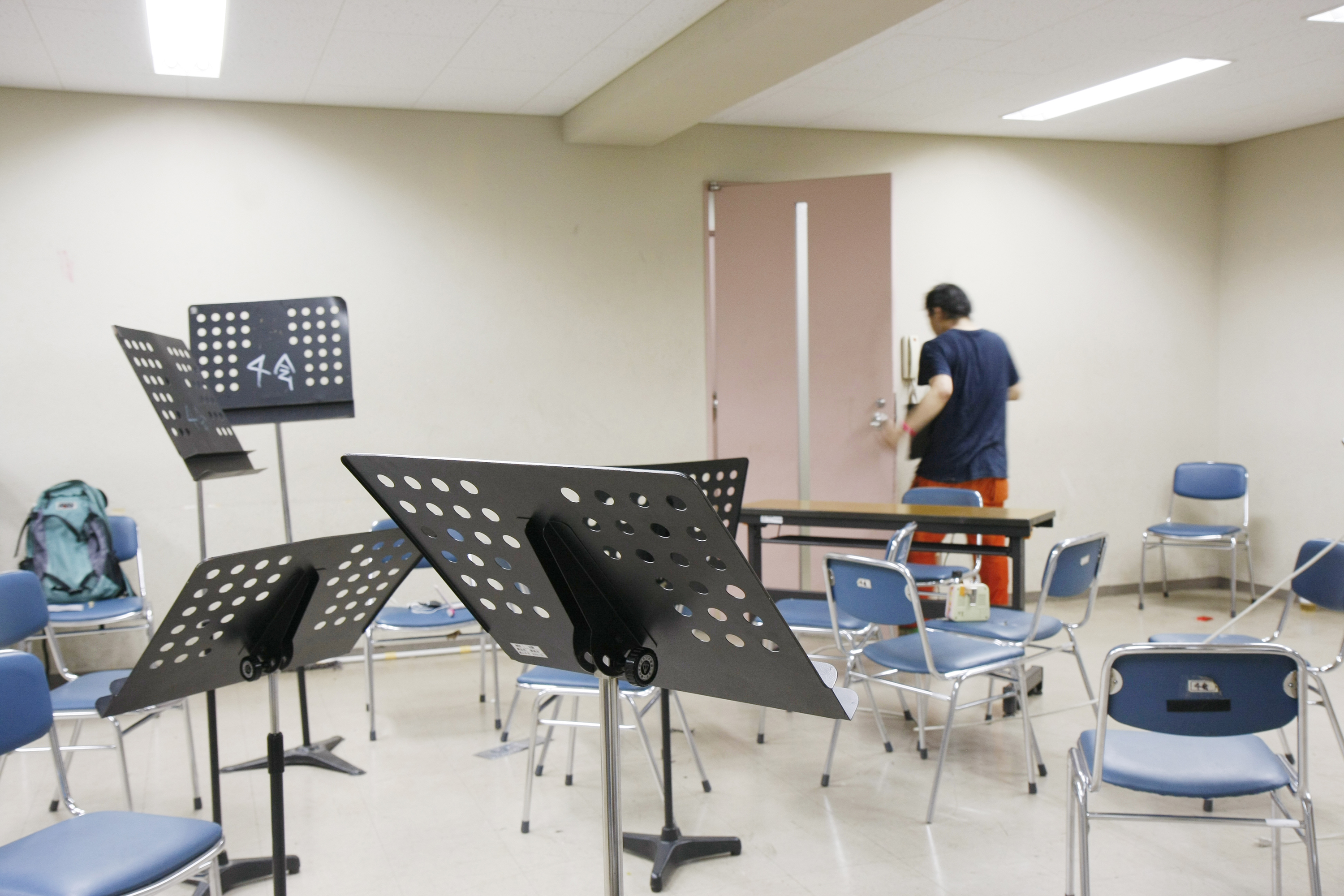 After everything is packed, two performers wear binaural microphones, transmitting the sounds they pick up to two portable amplifiers carried by the other two performers. All performers leave the building with their packed equipments, conversing with the remaining audiences, while keeping a necessary distance between each other to prevent feedback. The conversation within each group is transmitted to one another through the microphones and the portable amplifiers.

The performance ends when all microphones, transmitters, and portable amplifiers run out of battery.