"Out of Print: An Evening with Ugly Duckling Presse" at The Kitchen, New York

On April 9, 2011, exactly one month before the scheduled date of the event, we started thinking about our performance. We visited The Kitchen for the first time on that day, and noticed the stifling presence of the riser separating the stage and the audience, making any performance something to be looked at from a predetermined distance. We wished to subvert this imposing structure.

On the same day, we started talking about our ideas for the piece with a friend who lived in Tokyo at the time. During a month-long discussion over Skype, we conferred random thoughts about various aspects of the performance to her, who gave us significant feedback. Other minor conversations about the production of the piece took place with the editor from Ugly Duckling Presse who organized the event, as well as with the sound engineer from The Kitchen. All these conversations were recorded secretly, without obtaining consent of the interlocutors.

Then, six sound tracks of 18 minutes each were created using these recordings, arranging them so that each track would constitute a different narrative about the piece: beginning with ideas on how to begin the performance, elaborating thoughts about its temporal and spatial structure, developing arguments about the title and other details, and ending with a conversation on how to end the performance.

On the day of the performance, six transducers were attached to the bottom of six audience seats on the riser, converting them, and whoever sat on them, into loudspeakers. Since their audibility was limited, the distribution of audiences was regulated by putting “reserved seats” signs on seats located outside the hearing range of each loudspeaker. The entire process of going around the audience seats to attach the transducers before the show was accomplished in exactly 18 minutes—and it was filmed.

On stage were seven empty chairs facing the audience. At the start of the performance, You Nakai entered and sat on one of them, looking at the riser silently throughout the course of the entire performance. The six narrative tracks played out from the six audience-loudspeakers, while the film documenting the process of attaching the transducers to audience seats was projected in exact real-life scale onto the same audience seats. The piece began in total darkness, and if you were You Nakai, you would have seen the projected image of people moving around the riser like ghosts prowling through the audiences, for whom the beaming projection light must have simply been blinding.

If you were You, you would have also heard the six narrative tracks together, an impossible listening for the audiences localized in their respective seats in the riser. Those who happened to hear from a speaker nearby, or directly beneath, a discussion on the possibility for some audiences to realize that the best seats in the house were actually on the stage, might have been tempted to move to the remaining six empty chairs on stage.

Over the course of 18 minutes, house lights slowly faded in, becoming fully bright towards the end. The visibility of the projected film decreased in inverse proportion. How the piece ended, like all other aspects of the performance, depended on which narrative you were subjected to.

"…And I noticed that the number of chairs in one row is 18. And if I'm going to pursue that initial idea of problematizing the whole issue of seeing and being seen that the structure of the risers takes for granted, and hence that idea of projecting some image on to the audiences, and so on and so forth, and if I really sit in front of the audience, alone, with nothing… I think it's better with nothing…I could somehow use the seatings itself as a score for the 18 minutes."

"Because the seating is very directional… it's angled, so in a way you can show something to only the people sitting in the upper row chairs. So if you had a balloon or something that would slowly descend, only these people would see it and everybody else wouldn't notice, and then the next row, and then the next… and so on. So I can create delays in terms of the perception of what is being displayed."

"Basically, what you're doing is, creating a situation where they have to figure out that in order to see or hear the piece, they have to move." 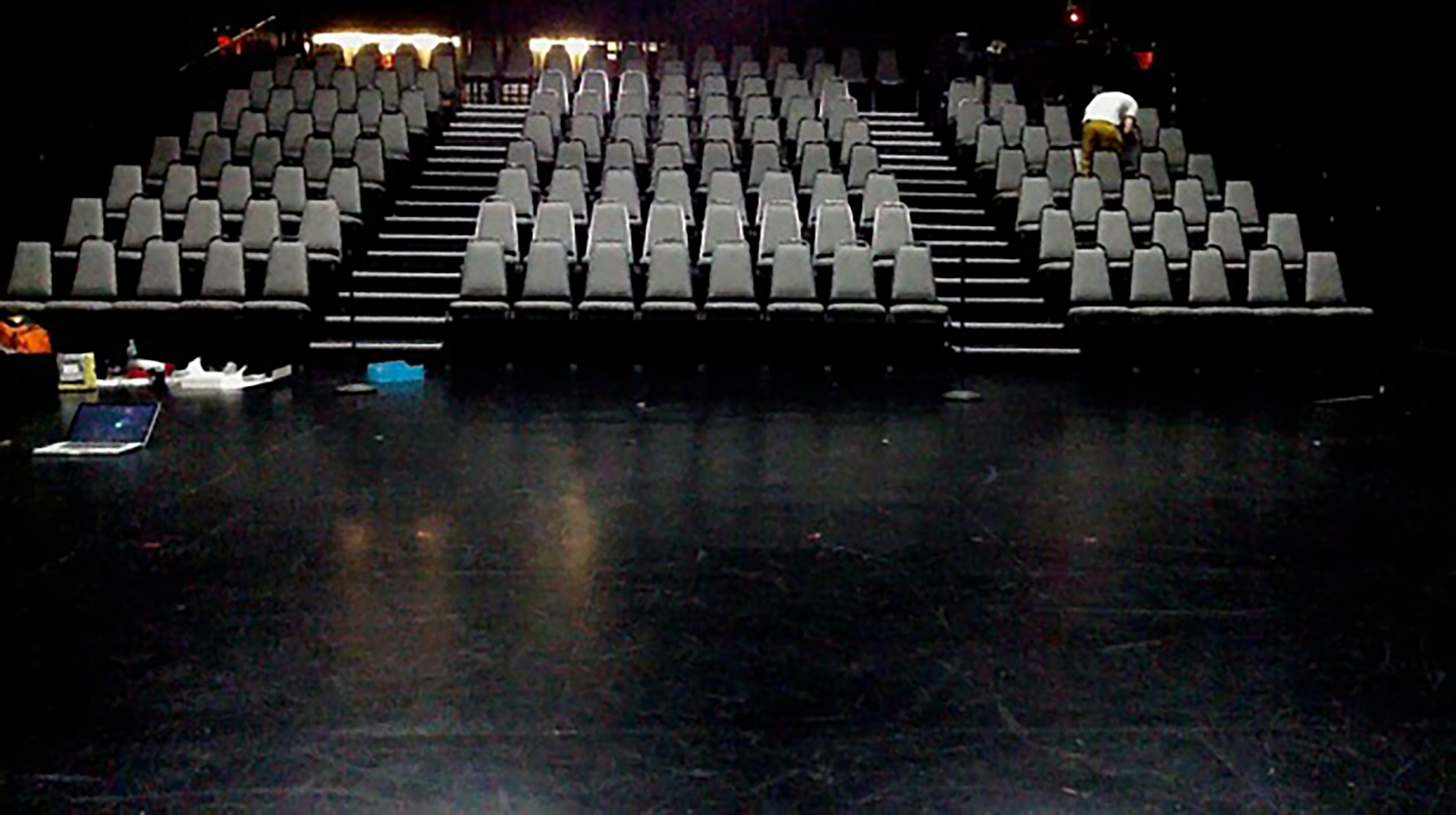 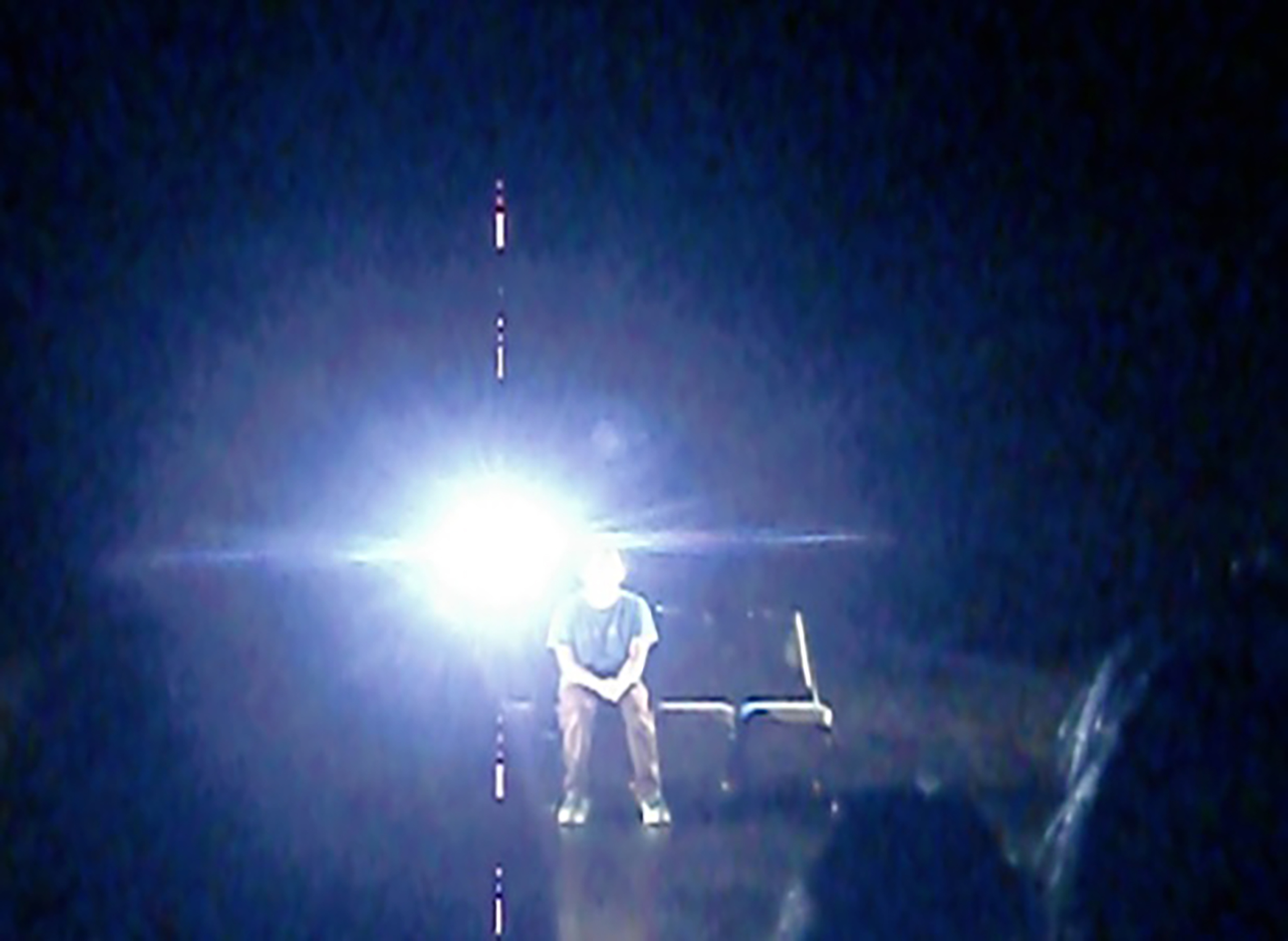 "That's very conservationist of you."
"What's 'conservationist'?"
"Meaning there's no waste product, like whatever is produced is used as the fodder of the next thing to be produced. Environmental."
"Eco…"
"Eco, yeah… Maybe that's what you should call this piece!"
"'Eco'?"
"Yeah, eeh-cee-oh: 'Eco'."
"…I like 'Eco'."
"I bet that means something in Esperanto.
What does it mean?"
"'Eco' means 'quality'."
"Pretty good!"