ENSEMBLE MISE-EN as NO COLLECTIVE: 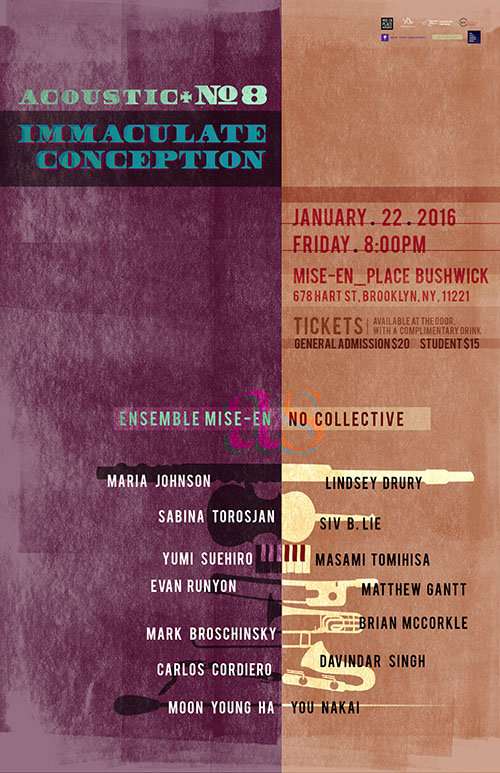 IMMACULATE CONCEPTION is a play of revelational music in two halves, six acts, and one intermission, which intends to reverse causalities (remove all stains) through the miraculous workings of uncanny resemblances (between a type and an antitype, so to speak), or at least give a fleeting impression thereof. Through three rehearsals each, No Collective and ensemble mise-en, both comprised of exactly the same instrumentation (flute, violin, piano, bass clarinet, contrabass, trombone, and conductor) and gender/race distribution, worked to become exact doppelgangers of each other without ever actually meeting one another. In the process, each group derived its own music through imitated gestures and (re-)imagined sounds of the other. The effect of doubling further proliferates in the concert, where the three-times-two rehearsals is unfolded in the three-times-two acts, the first half enfolded in the second, and each act is explained by the next while containing the one before. The resulting sequence stages performative faith to something that never existed, something that appears as foreshadowing the events but only in retrospect. The hope is for such perturbation of causes to save us all from our original sins (which is of course that of conceiving and being conceived), not through expiation, but through sleight of hand. To see is to believe, to hear is to doubt, to concert is to bind.

Cody Eikman
MUSIC AND ITS DOUBLE: THE IMMACULATE (AND NOT-SO-IMMACULATE) CONCEPTIONS OF NO COLLECTIVE
TDR, MIT Press, Spring 2017